Halloween With The Cherry On Top

This is what we did for our village's Halloween festival.  I'm an American Ex-Pat living in a rural village/suburb in East Flanders, Belgium.  Halloween hasn't quite taken off in Belgium, but it is growing in popularity.  Especially, in my village.  Yay!  This was our third (I believe) year of our Halloween Celebration.  The party committee asks that everyone do a bit of something scary to dress up our community.

The biggest problem I find, is that it's nearly impossible to find Halloween stuff!!!  On a jaunt to Ghent, I came across a window dressing store.  Eek!  I checked it out on line and saw it was open to the public and they had some pretty cool Halloween stuff.  I purchased the grave stone, skull, bones, that hanging, black death skeleton thingy and some black mesh.  Etalage Gouwy can be found here.  If you want to see more photos of our party, click here. 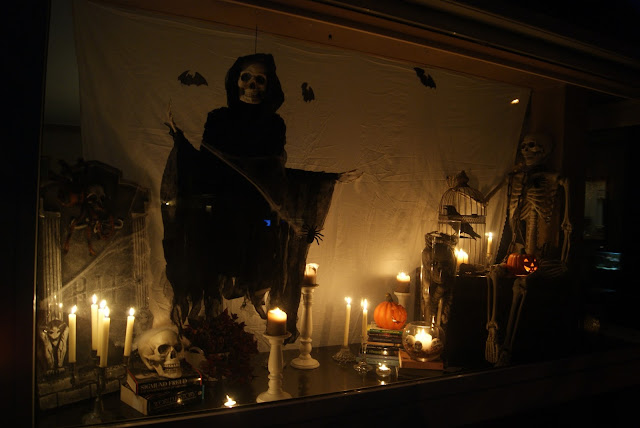 This photo is for better detail.  I bought the large, full skeleton, the tiny skulls in the glass bowl and the spiders at Paradisio.  I also got JJ's costume there.

The bats are hung with nearly invisible wire, hehehe...They come from templates you can find on our Pinterest board, Halloween.  The raven is also from a template.  I printed out the raven, cut it, then glued it on to the inside of a cereal box for rigidity, painted that side and cut again.  You can always use a black marker if your paper shows a bit around the edges.  I hung it in the cage with more of the nearly invisible wire. 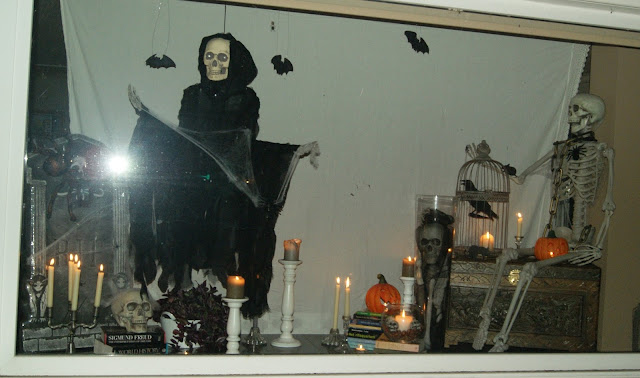 For the long vase, I used the black mesh and placed the bones in and around it.  Books help give height to the arrangement and the candles really help bring the whole thing together.

More candles outside, pumpkins from the fruit and veg box and we're ready for the visitors! 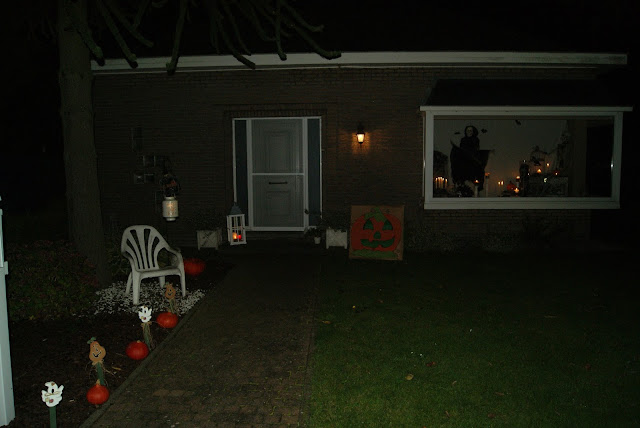 The chain is also from Paradisio and JJ named the skeleton, T-Bone.  Hehehe... 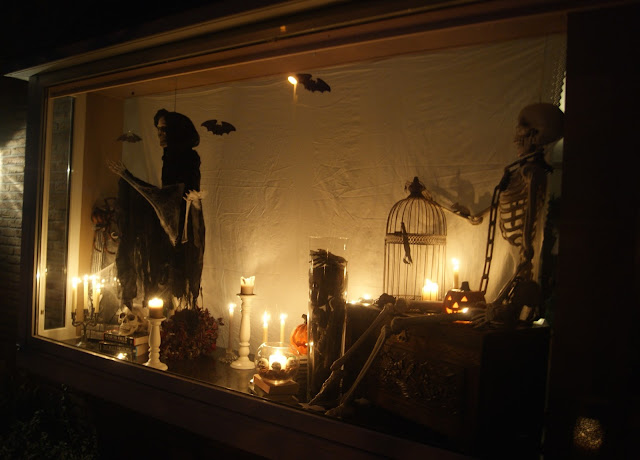 At the last minute, I found this Jack-O'-Lantern at the Aldi. 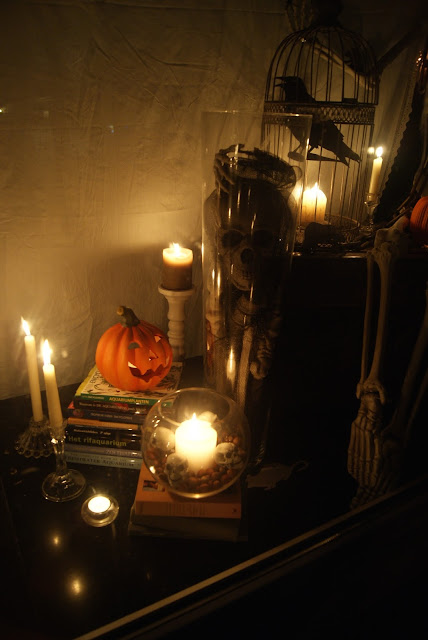 I used nuts from our neighbours tree to keep the candle steady in my glass jar along with those tiny skulls.

This guy is Gerald.  His eyes light up and there is a motion sensor and scary noise.  Very noisy! I turned it off since no one would be walking by anyway. 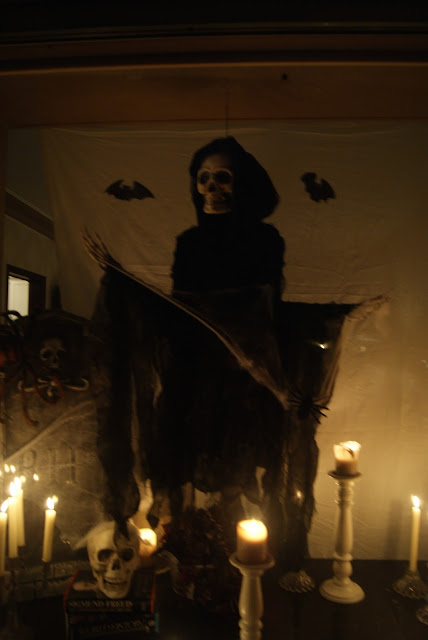 Liam wanted to be a ninja, again.  Yes!  Easy peasy!  Black jogging pants, black long sleeve t-shirt and a ski mask.  Cake!  He made some paper Chinese stars from a video he found on You Tube and took his safe, foam sword.

If you don't have a ski mask, here's something I found on Pinterest that you can do with a long sleeve shirt. 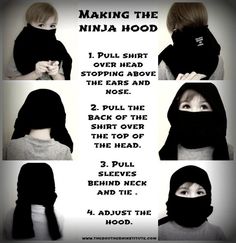 Liam thought he had the problem solved, when we couldn't find his ski mask, which was two pair of underwear!  BUAH!  This kid!  (Yes, they were at least, clean.) 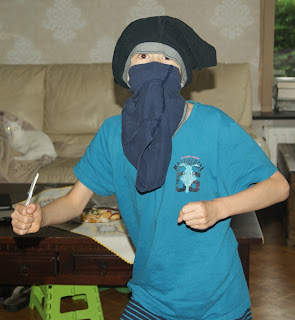 JJ wanted to be a skeleton this year.  I broke down and spend the 7 Euros for his costume.  He found the mask way too scary and didn't want to put it on.  Dad tried to encourage him by saying, "Once it's on your face, you don't have to see it any more".  Hehehe...He at least let me get a few photos with it on. 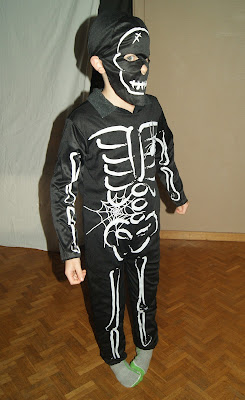 This can probably go on one of those meme's about Failed Pins !  Hehehe...I wasn't feeling all that great and just didn't put the time into the make up. Then I forgot my cape!  Ugh!  Everyone thought I was a witch, again.  Hehehe...I was SUPPOSED to be a vampire-ess.  The wig drove me nuts and those awful fake teeth left my mouth sore for a couple of days and made it impossible to talk!  Hehehe... 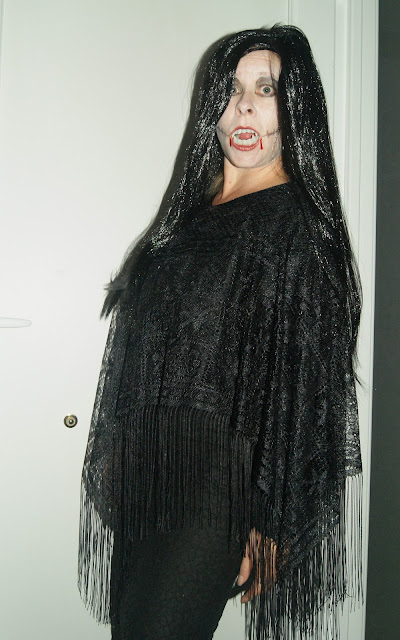 This was the look I was going for.  BUAH!!!  Not even close! 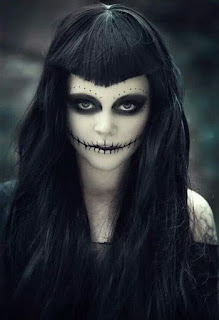 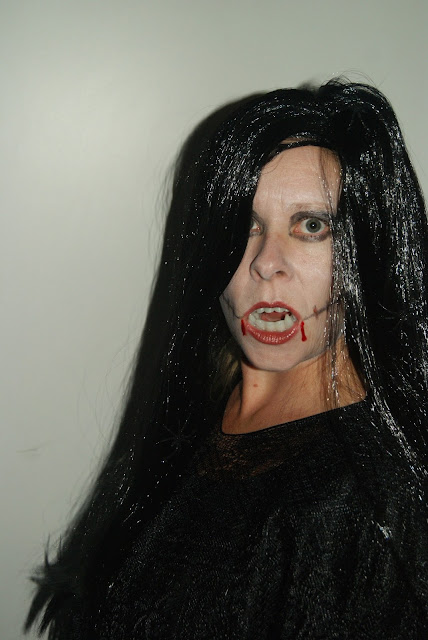 There you have it!  Our wacky Halloween!  Hehehe...

Thanks so much for stopping by for a peep and we hope, a laugh. 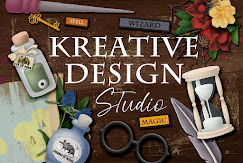 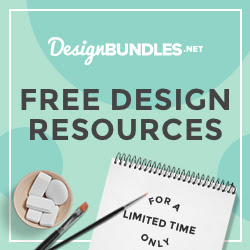 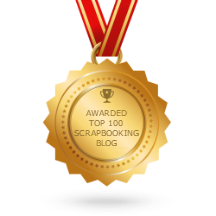 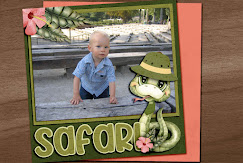 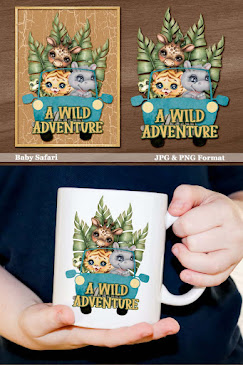