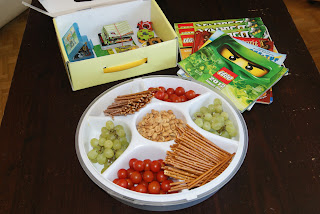 A fabulous Friday to you!

This week we hosted a Lego party just for the fun of it.  It took a few days of planning, it costs a couple of bucks, but not too much.  The kids were really excited about it and they had a GREAT time. 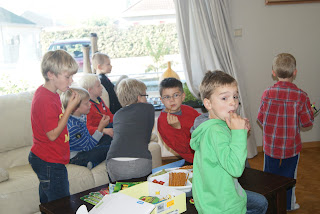 When the kids arrived at noon, I had this tray of healthy-ish treats ready for them until I had lunch ready.  In Belgium, the kids get out of school at lunch onWednesdays.  So, I picked up as many kids that could fit in our Touran and brought them back with me.

Even though I put RSVP on the invitations and sent e-mails way in advanced.  There were people calling the day of and the day before the party, which messed up a few things because I did my shopping in advance.  There was even someone hailing us down on our way to the car wanting to come.  Ugh! 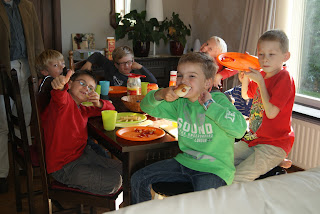 The children were told that they could not play in the beginning because we were going to eat first.  So, when they came in, I had Ninjago on the TV. That worked great.  Thank goodness!

The boys had hot dogs and french fries.  As you can see by the picture, they were very pleased with this.  Those who brought a lunch, left it in their backpacks.  (I did mention that lunch would be included on the invitation.) 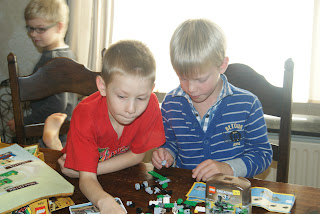 After lunch was cleaned up, I made up sections of the living/dining area where particular Lego sets
were displayed, ready to play with.  I learned to
keep the bedrooms off limits when it comes to
parties. Toys get trashed and broken and the room is a disaster!  No way!  Not again! 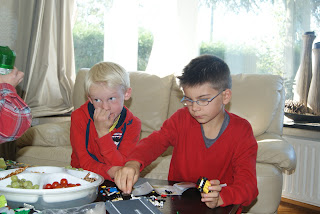 Further down, you will see a  Behaviour Booster Chart.  Let me suggest this.  It worked wonders.  The place stayed clean, the kids got along tremendously and I'm not sure if I ever was complemented as much in my entire life.  Hehehe...  Make sure you point out when someone does something worth earning a sticker for.  They went nuts over these charts and were
more than willing to help keep things in order.

The goal was to get 5 stickers.  Then they would receive a prize as they left the party.  Before the first one leaves, the person with the most stickers gets to choose their prize first.

Behaved, Team Work and Mean Clean are how they earn their stickers.  They worked in teams to construct their Lego creations and for the Scavenger Hunt. 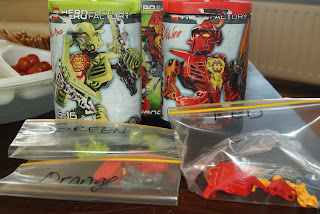 Below with the other printables I used, you will find a Scavenger Hunt/Zoektocht print out.  I would also highly recommend this activity at your party.  They went crazy! 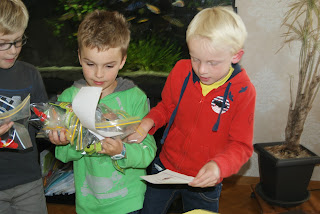 There were three teams.  Each had their list of clues where the pieces could be found.  I put them in a different order so that they were not on top of each other the entire time. In each hiding place there were three bags clearly marked with which team the bag was for, they needed five bags with
the colour of their team on it.

After they found all five bags, they had to assemble the robot.  The first team to complete
the mission was the winner of three stickers.  The second team, two stickers and the last, one sticker. 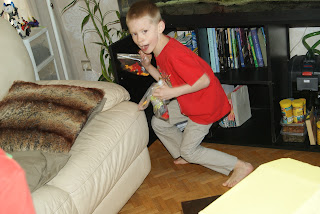 The kids worked beautifully together.  I continuously encouraged them, pointed out desired behaviour and gave stickers often.

>>>That's my little guy very happy with his find!

Keep the bags separate from each other if possible. 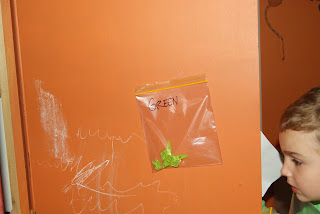 Make it a bit clear where they are so that they don't trash your place.  Like you see here.>>> 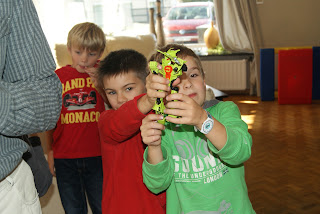 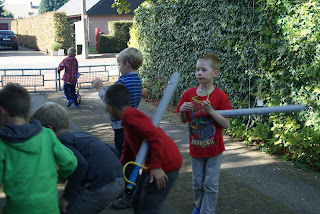 We actually had, nice weather.  What a great
opportunity to put the kids outside and clean up
around the house, do dishes and get the next
part of the party ready.  They cleaned up all of the toys before going back inside and earned more stickers. 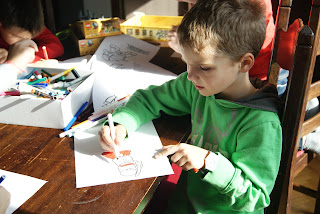 Another phase of the party was Ninjago/Lego
colouring pages.  I will provide links for you at the bottom of this entry.  I couldn't find anything on Lego's website.  If you know of any please leave a comment. 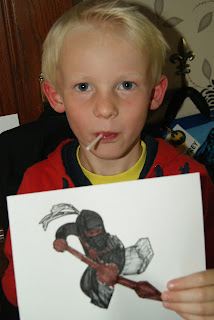 Upon completion of staying in the lines and
writing their name, they received another sticker.
This not only motivated EVERYONE to colour a
page, but also took up more time.  Keeping the kids
engaged is crucial for good behaviour.


Before each child went home, they received a diploma, their Behaviour Booster chart if they wanted it, their straw with Lego head, the laminated Ninjago dude name tags (have more than one of the same if possible.  It was hard for them to choose.  Hehehe...), a small bag of treats and a prize for their sticker charts.  Of course, they all made the goal of 5 stickers! 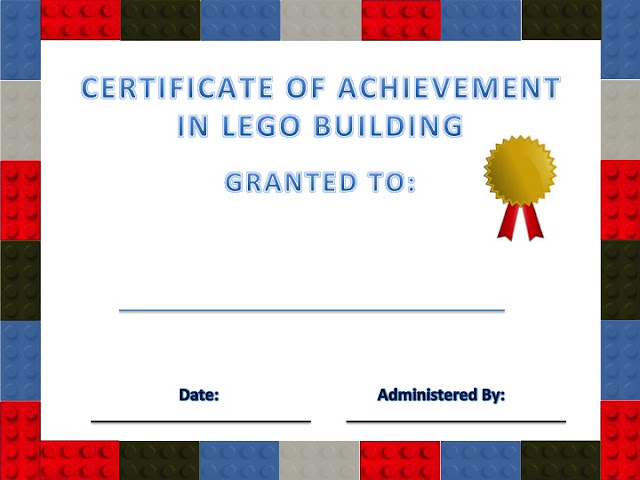 Below you will see my print out for the Scavenger Hunt/Zoektocht in both English and Dutch.  There are explicit directions to remind you how to set up the game.  Don't forget to mix the order on your print outs or put numbers for which ones they should look for first. That might be easier. 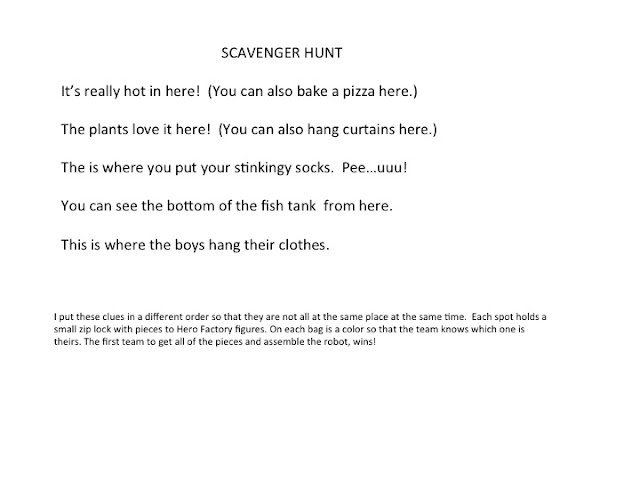 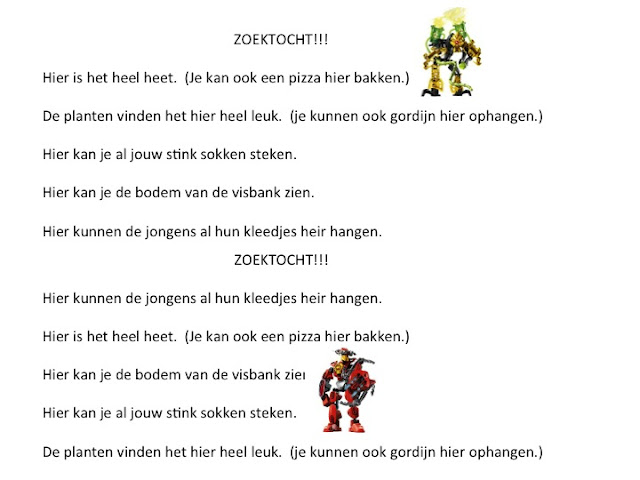 Below are the most useful Behaviour Booster Charts.  I highly recommend them to keep things neat and the kids in line.  Once again, I provided them in Dutch and English. 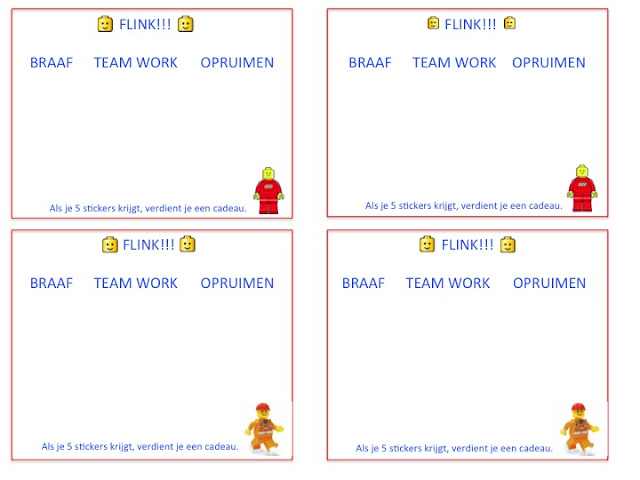 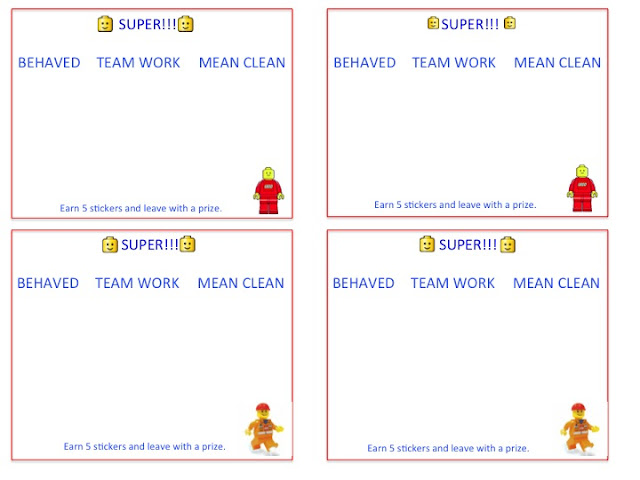 Here are some very simple printouts of the invitations I used in both English and Dutch.  There are also instructions on my print out. 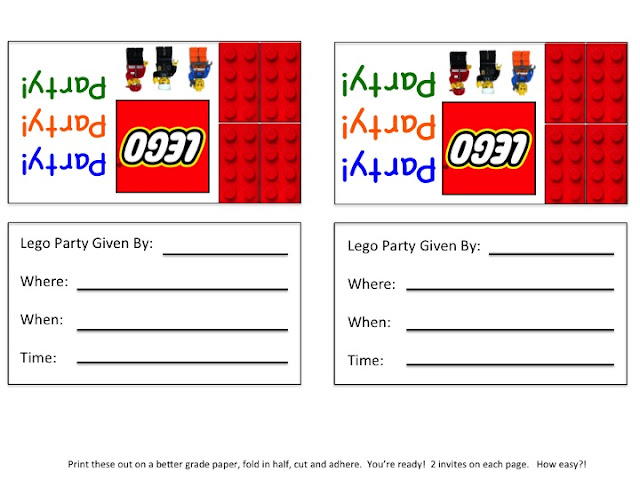 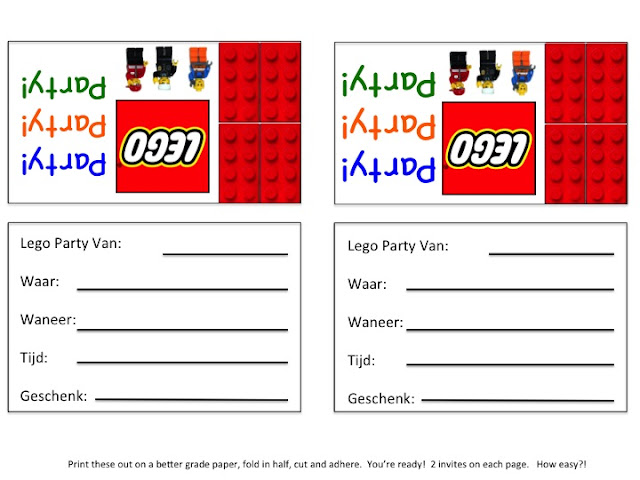 These name tags were also a hit!  They like them all and could not decide which ones to take home.  I put a hole through and tied some string around.  Of course you could get key rings, pins, paper clips, rubber bands, etc... if you wanted to use those.

The straw toppers were also laminated, cut out and adhered with a small glue dot.  It went really fast.  I had to make extras for the boys to take home.  They loved them. 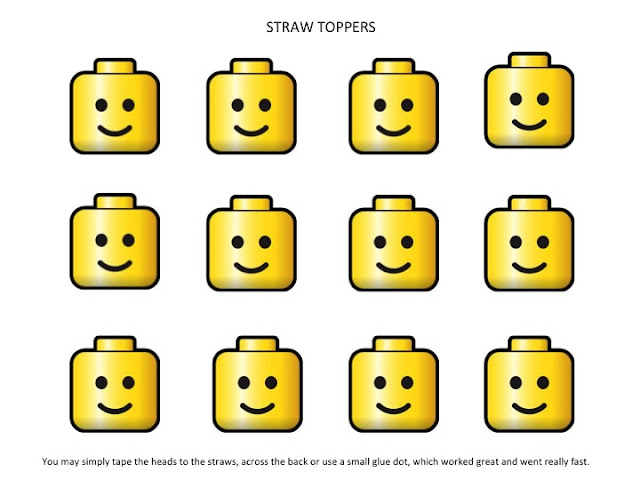 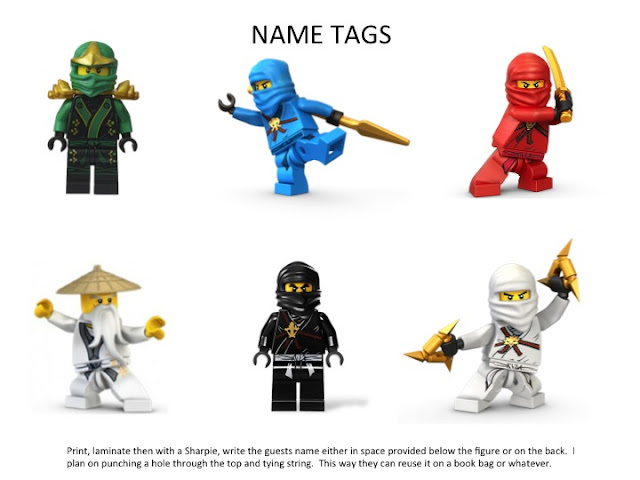 The colouring pages I found on Google Image Search after not finding anything on Lego's site and even Pinterest came up blank.  The straw toppers were found there, though.  All of the rest of the stuff I made up using PowerPoint. 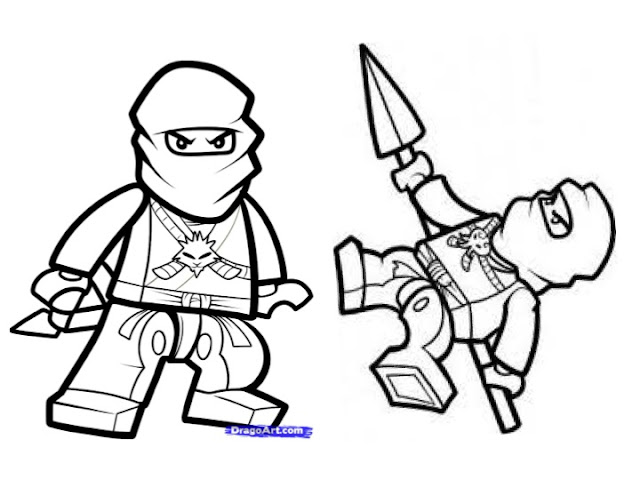 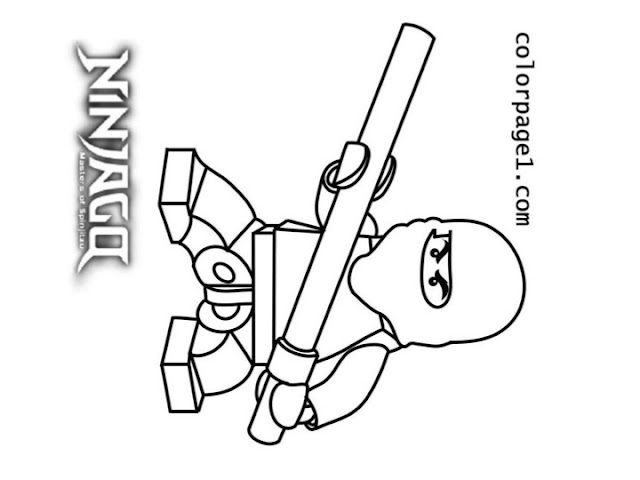 I couldn't believe how excited the boys were, how much they seemed to love EVERYTHING, how well behaved everyone was and how easy this party was to host.  I'm not a fan of having parties, but if they all were this easy, I might have them a bit more often.

Share your ideas, finds and pictures when you host a Lego Party!

www.colorpage1.com
www.DragoArt.com
www.Pinterest.com  Here you will find even more ideas for your Lego Party.
www.Lego.com
at October 12, 2012
Email ThisBlogThis!Share to TwitterShare to FacebookShare to Pinterest