Build A Book Challenge And A Prize

Welcome to The Cherry On Top!

I entered the Build A Book challenge from The Scrapbooking Studio.  We had a couple of weeks to finish 20 pages for a scrapbook.  I did our most recent trip to Spain.  I used all kits from one designer in hopes of giving my album a cohesive feel and I also used the same font throughout the book as well.  I chose A-Manda Creation, not only because she's an artist at The Studio, but her kits are really full, awesome, quality kits that are very well thought out, too.

I think this would be a great cover for my album.  It's the view from our apartment balcony.  Don't ya just love the way the sea and sky match the kit?!  I ended up using the Americana kit a lot.  Although, the intended theme is Fourth Of July, you can see that it works for anything.  I love that! 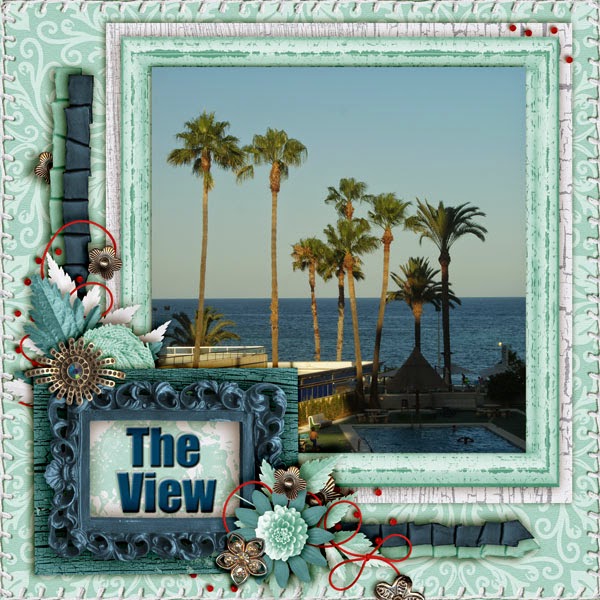 For my first double layout, I went with a really fun, bright Water Park kit from A-Manda Creation.  These colours are choice and the ellies are perfect. 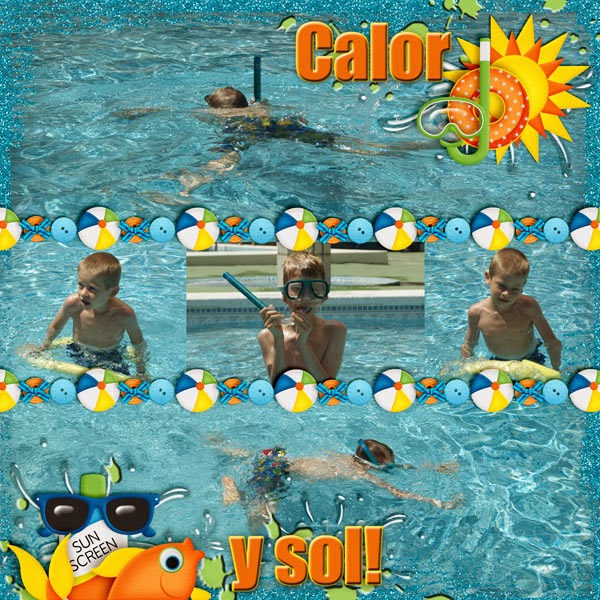 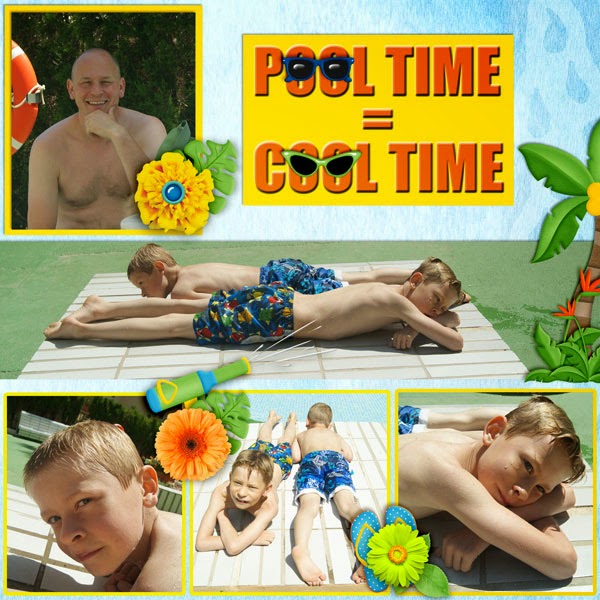 In the beginning of the challenge, I wasn't doing double layouts and I found I was getting a little behind until I thought of going double.  Hehehe...It worked great and I do prefer to have my side by side pages match for in the album.

For the next three layouts, I went back to the Americana kit. Towards the end I was panicking that I wouldn't get enough pictures in my album.  I took care of that really fast, but I still would like so many more in there. 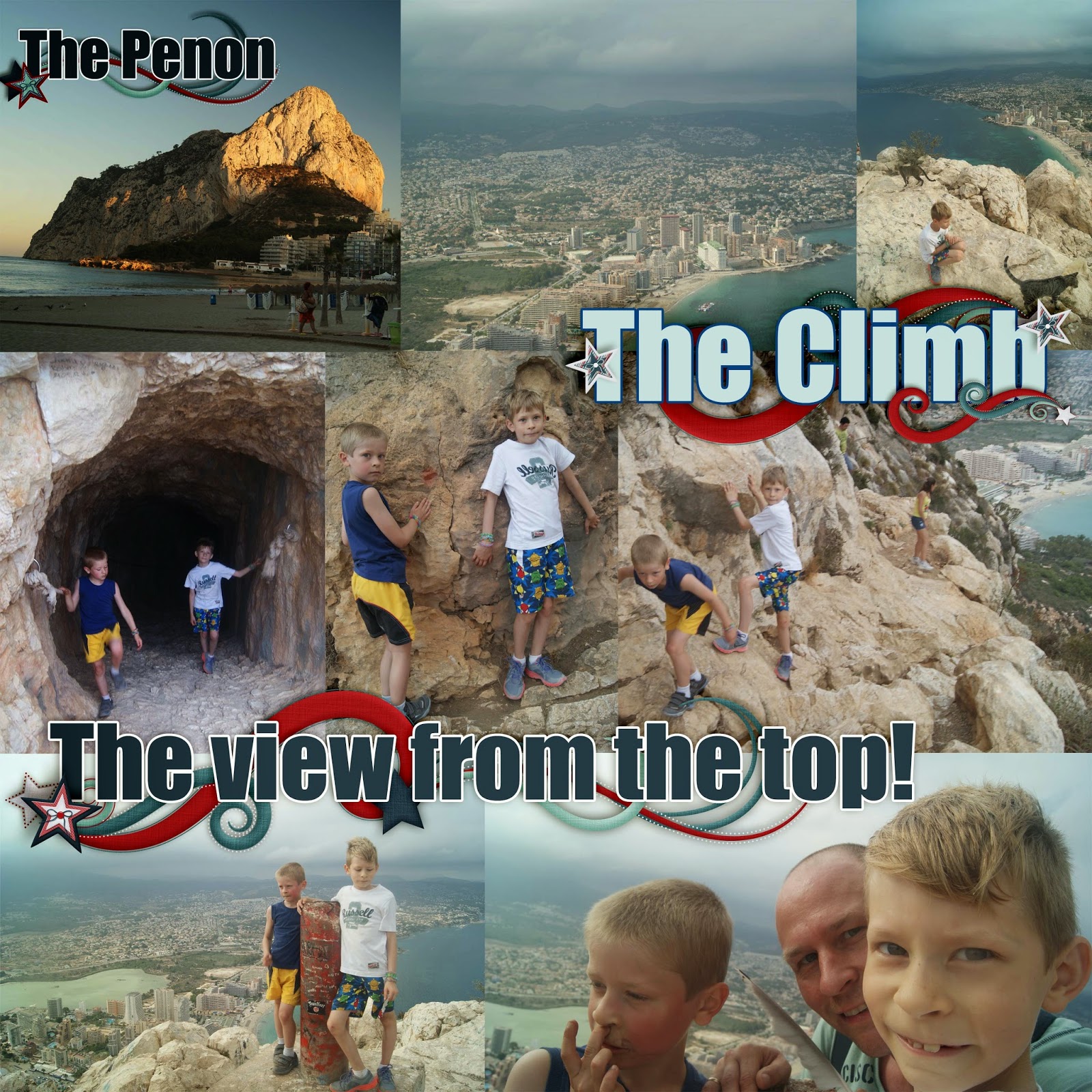 This climb the boys did was insane.  I am so glad I didn't go!  They do not have any safety measures going up this huge rock and at any point in time, my boys could have tumbled down to their deaths.  My GOODNESS!!!  I still hate to think about it.  Not a lot of people venture all the way to the top.  Apparently, coming back down is a lot worse.

Here we are having at the pool.  Looks like he's sucking it in a bit as well as showing off his diving skills!  Hehehe... 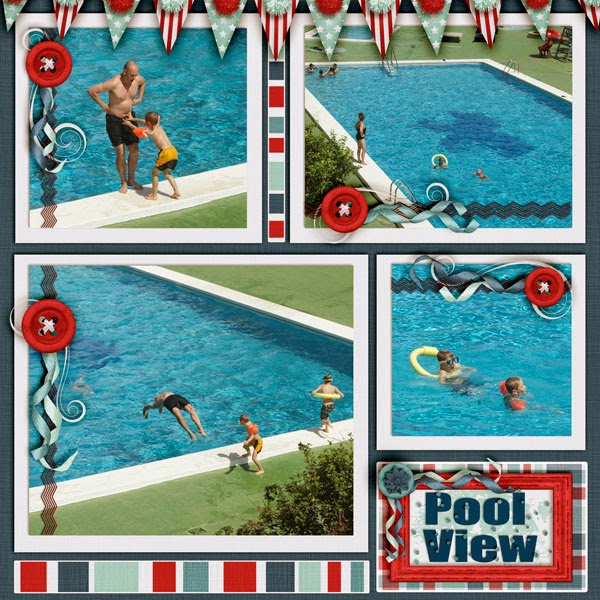 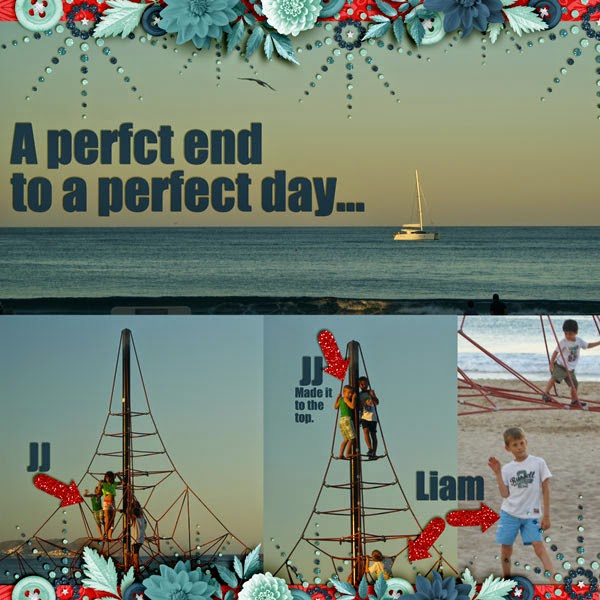 The layout above is pretty unique.  I really wanted these pictures in the album.  JJ's amazing climb to the top of this rope thing and Liam's reluctance to reach the top.  Hehehe...He is so lazy!  Hehehe...

The next couple of layouts, I used the kit, Cache Me.  It's a collection of fabulous small kits that all coordinate with each other and have a lovely, natural outdoorsy theme.  Check out all of this fabulous texture and warmth in this kit.  I really like it!

You can never get a perfect picture, right?!  Each shot has someone not doing what they are supposed to! Hehehe... 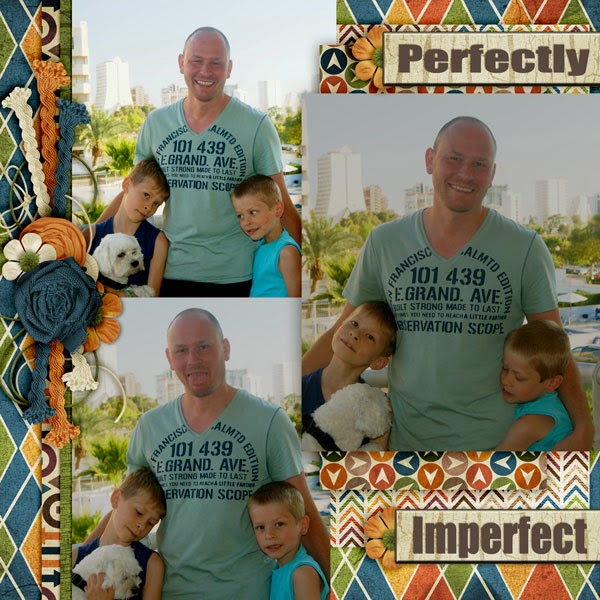 For this layout, I'm sporting my brand new dress I bought on the boardwalk.  It covered up my protruding belly.  Hehehe...  Those berries are in the kit, but not as such.  I used a graphics effect to give them a little bit more of a summer feel to go with my page.  The word art was another freebie from The Studio. 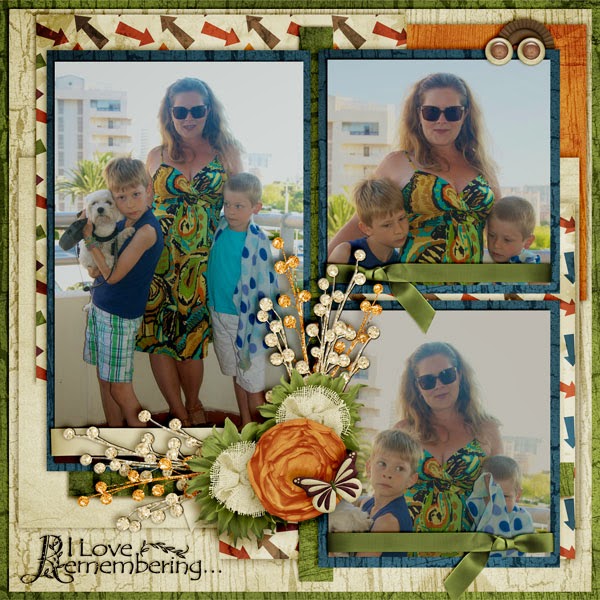 Keeping with this gorgeous kit and going big on a really nice photo of me and my boy.  Ya just can't get enough cuddling in one day, can ya?  I used some folded ribbon under and around my frame to make it stand out from the like coloured background paper.  I kept the softer, summery colours from the kit for this one. 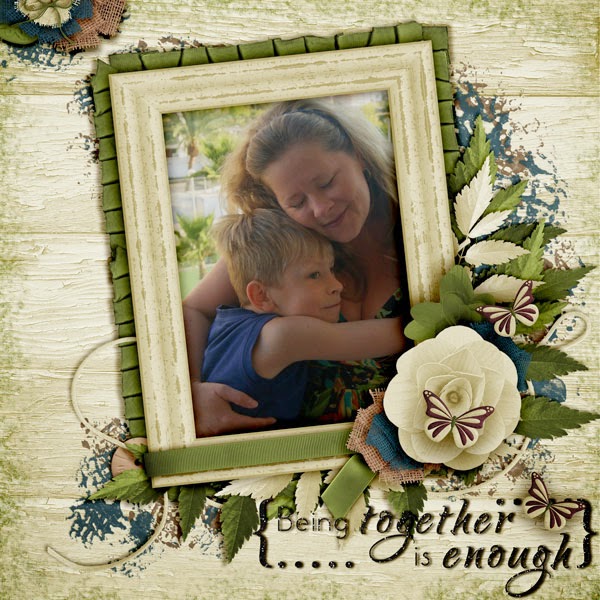 I was lucky enough to work with some kits that were not even released yet.  Giving the folks at The Studio a chance to see a new kit before the rest of the digital world.  This one was one of them.  Carve Up Some Fun is still not out in the store, but will be on October 10th.  Obviously, it's a Fall themed kit, but once again, I pulled out the fun, bright colours that went perfectly with my Spain photos.  The elements as well.  No problem.

"Vriendje" is friend in Dutch.  The bird came to visit twice, everyday.  JJ called him his, "Vriendje".  He would shout so loud, "VRIENDJE!" then wrap his arms around himself and swivel.  It was so darn cute.  He would light up like a Christmas tree when his friend came to visit. "Moeten we echt weg? means, Do we really have to leave. 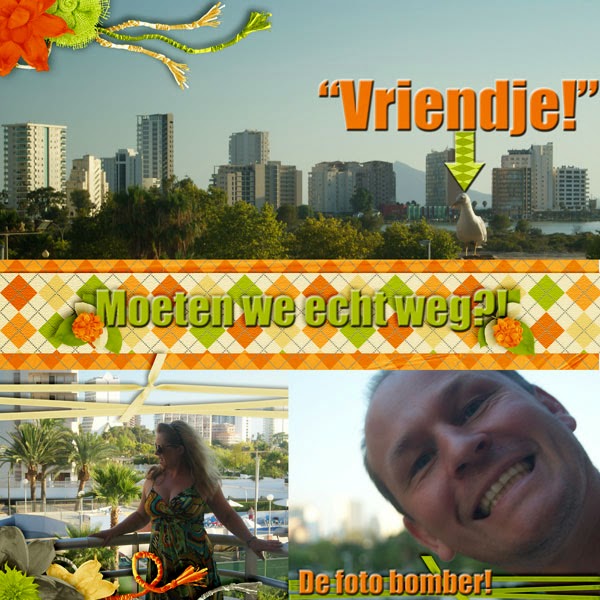 Another new kit I got to work with was Fall Frolic.  The orange representing the sun and the blue the sea and sky, made it also a great match for this album.  My hubby dared me to post a picture in my bathing suit.  Hehehe... 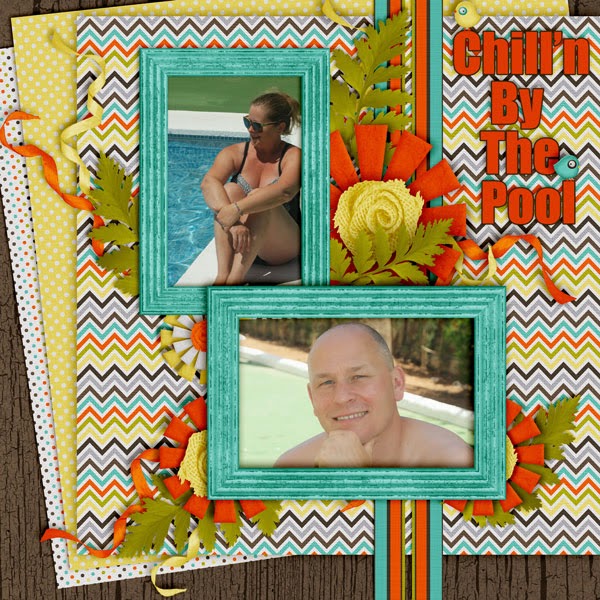 We found this awesome, little carnival down the street from our apartment.  We took the kids there three times which, according to them, was not nearly enough.  They loved it there so much and I took a ton of fun photos documenting those unending smiles and laughs.  I've never seen them this happy and it still brings a smile to see the pictures. I've got a bunch more on my phone, but don't know how to get them on to my computer.  Hehehe... 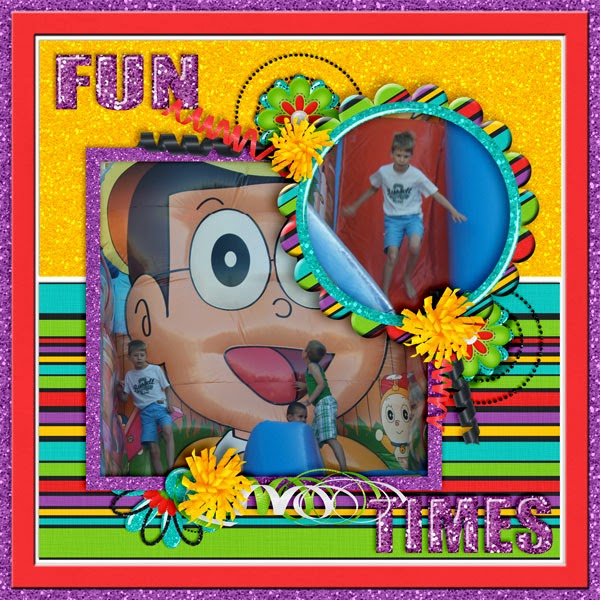 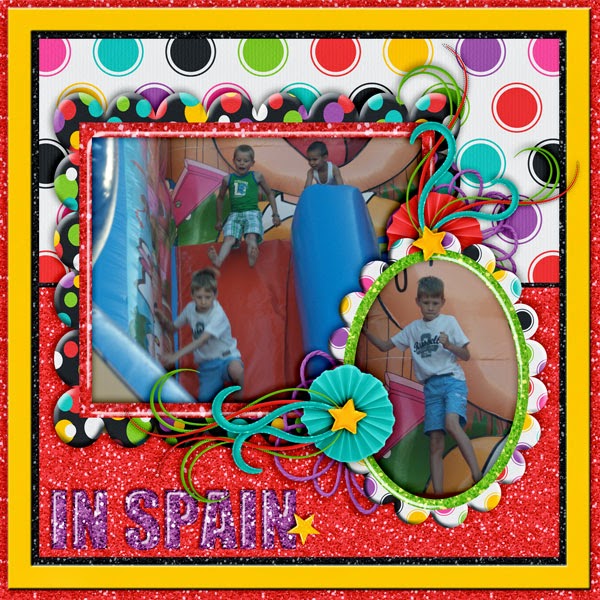 Take a look at these smiles!  Totally awesome!  That's the thing with Autism.  These kids are either elated or totally ticked.  There is not a lot in-between.  I kept with the bright and fun colours, but used another new kit and that's Plum Perfect, isn't it?!  Hehehe... 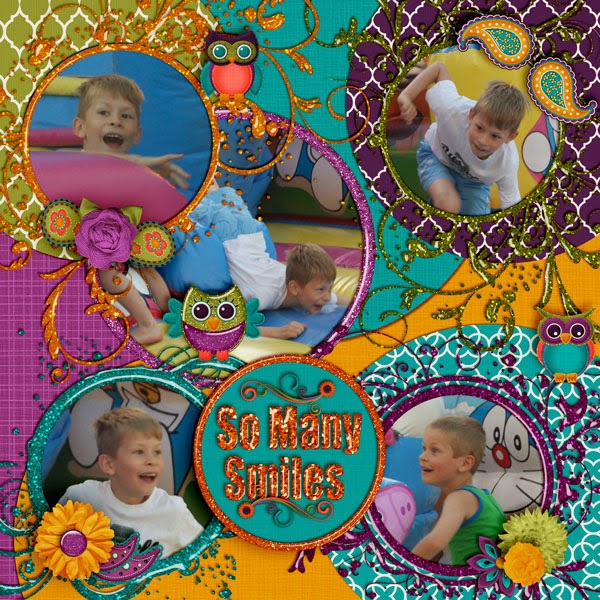 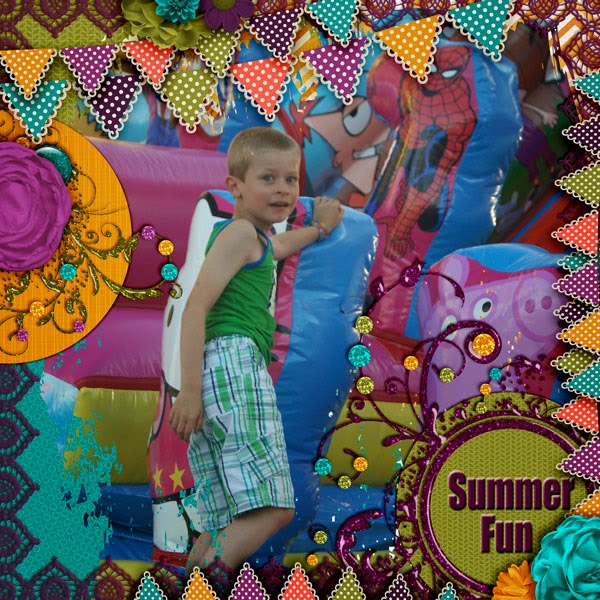 A-Manda Creation really knows how to choose her colour palettes.  How about these next few layouts.  They are not the same kit, but they will look nice side by side.  This first one is from Pretty As A Peacock.  I used a couple of the prompts that The Studio was giving away in hopes of keeping us motivated to finish this daunting task.  It worked! 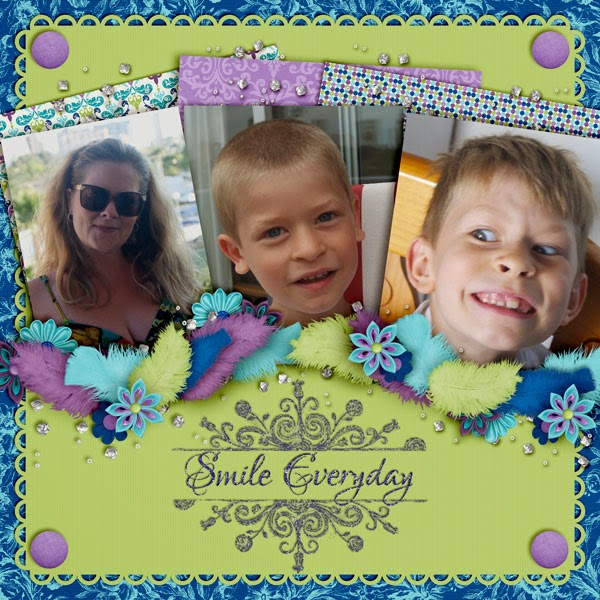 Liam's smile was a bit scary there!  Hehehe...

I used Blue Berry Patch for the next layout because the colours matched my photos really nicely.  Once again, the elements were so NOT themie, that I could even use them in a fun boy's layout. 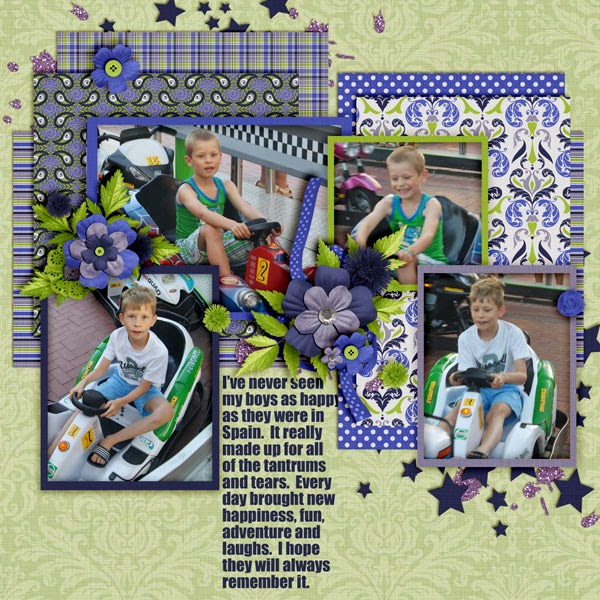 Below, is how we started the trip off.  Leaving Belgium and traveling south through France via Paris. One of the lovely stops to fill up and pee.  Just as expected!  Yuck!

Is this kit not gorgeous?!  Fancy Free is also relatively new and man, is it up my alley!  I love purple and pink.  This blue green is totally making it pop as well as the splash of red.  I love this kit and this layout!

Once again, I used the free word art that The Studio provided.  They had all kinds of word art and templates for those on the challenge.  Nice, eh? 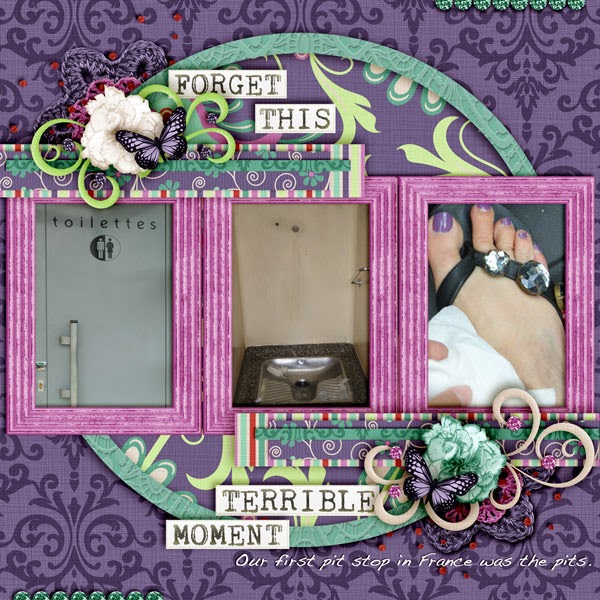 That's different!  I wanted to show a variety of scrappy styles as well as use a lot of kits.  The kit is Super Teacher.  I thought it went great with the graffiti, so I stuck with an urban touch to my layout.  I have no idea how my hubby could be so relaxed in a Parisian traffic jam!  How about $2 for a liter of gas! 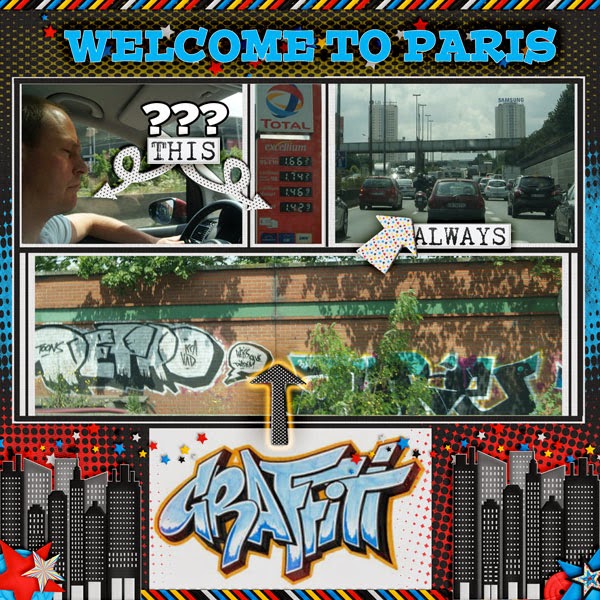 My last layout here is created with the kit, Perk Up.  A coffee themed kit.  Look how awesome that golden colour goes with our beer!  Hehehe...See me there?  My laptop, an ice cold beer in an ice cold mug...IN SPAIN!!!  These things are my most favourite things about Spain.  Sun, food and family.  What a trip?! 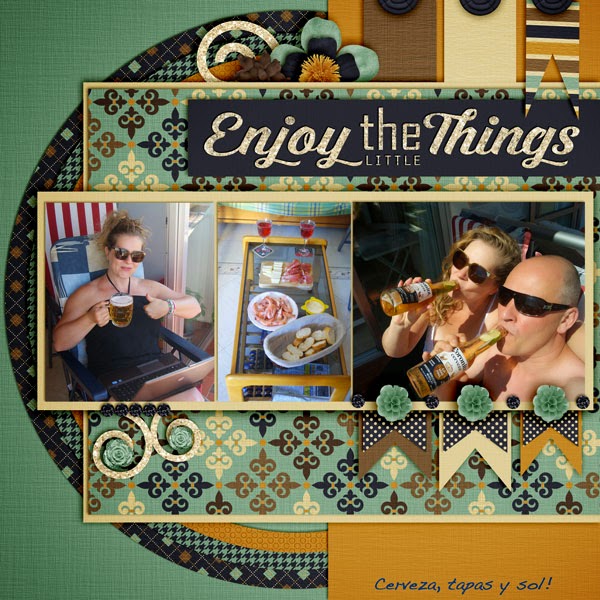 Now, you know I would never have you come all of the way over here to check out this insanely long blog without giving you something in return.  Thanks to my gal, Amanda.  I've made up some encouraging word art for you that you can use to start your album.  Just do it!  You know, every time you look through it, all of those memories will come flooding in and you'll smile and get warm fuzzies.  Do'cha love those?! 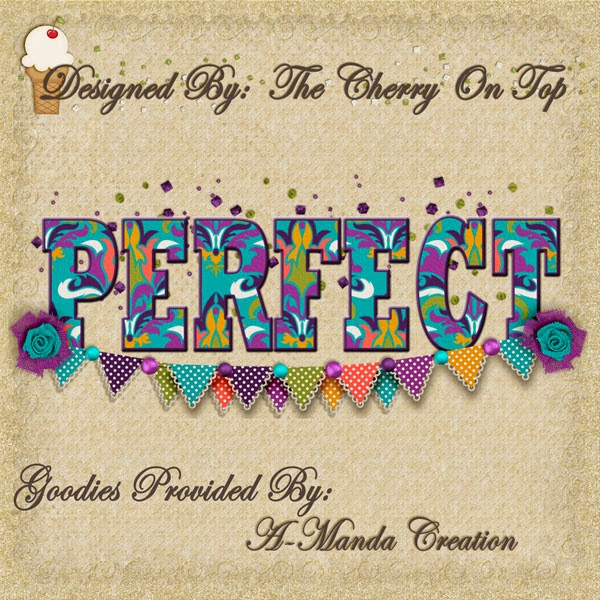 Enjoy your freebie and thanks for hanging out with The Cherry!

at September 29, 2014
Email ThisBlogThis!Share to TwitterShare to FacebookShare to Pinterest